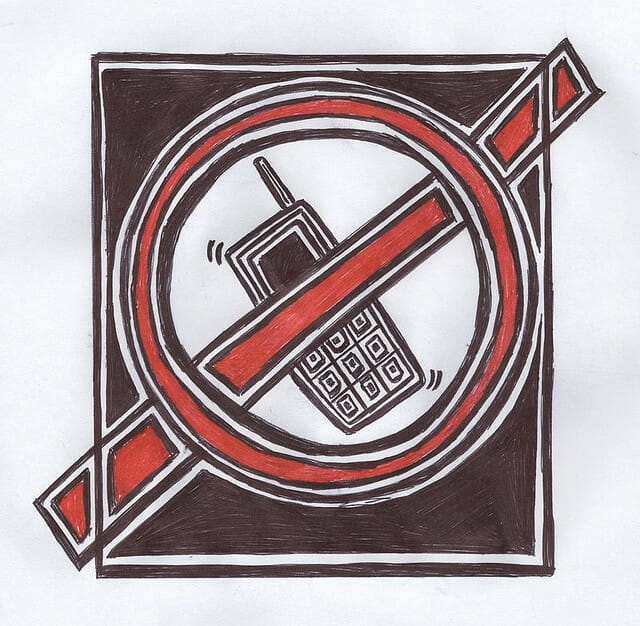 The use of cell phones has increased exponentially since their advent in 1973. Today, you’d be hard-pressed to find a person who doesn’t own one, much less someone that is willing to leave it behind. The use of cell phones, however, has many issues tied to it, not the least of which is the exposure to potentially harmful frequencies that emit from the phones and the towers from which they receive their signal. Many public places, including one American town, has banned the use of cell phones within their establishments; so, what are the benefits of implementing cell phone free zones?

Honey, Where Are We?!

One American town, affectionately known as America’s Quietest Town, where locals (and the occasional tourist) are forbidden by law to use any frequency-emitting devices. They have banned all use of cell phones, internet, and microwaves. Why? Are they the Frequency Police? Well, they have a good reason, but you’d probably never guess what that reason is. Do they all have an aversion to technology?

Green Bank, Virginia, which lies very near to the border of West Virginia, is home to the largest radio telescope in the world. No aversion to technology here! However, it is this telescope that is used to listen to sounds emitting from our galaxy that are so faint and so distant, that even the minuscule 3 watts of energy that are emitted from a cell phone can block its reception. Multiply those 3 watts by the average number of cell phones in a given area, and you can see how listening to outer space would quickly become impossible.

Leave Your Phone at Home

A restaurant in France has implemented a policy that bans the use of cell phones within their establishment. They aren’t studying outer space, of course, but the owner of this restaurant has come to realize the benefits for his customers when they are not inundated by the constant notification sounds from cell phones – their own, or those around them. He believes that a dining experience should be a pleasurable one, and that just isn’t possible when technology butts into the present moment.

Come On, Pretty Please With a Discount on Top

In fact, other restaurants are following suit and, while not outright implementing a cell phone ban, these restaurants are offering discounts to patrons who do not use their cell phones while dining. People believe it is less rude to use your phone at dinner than while you’re at church.  A whopping 88% of restaurant patrons think it’s rude to use your phone while dining in the majority of circumstances. Restaurant employees that witness cell phone usage during a couple’s apparent first date can foresee this is probably the last date.

Cell phone usage can affect your health, it can make you seem disinterested in what is going on around you.  Try limiting your use to your personal time, and see how your relationships can improve when you’re more present. Look up and see what nature has to offer you. Enjoy being a human an interacting in real-time.  Please share our articles and support the movement. OPTOFF

Ditch The MP3’S And Get A Record Player
No Phones At Dinner Please!
The Risk Of GMO Mosquitos, Animals And Humans
Why You Should Not Give Your Kid A Smartphone
THE FEAR OF ROBOTS TAKING OVER THE WORLD
Why Are So Many Bees Dying? Are We Next?

Why Are So Many Bees Dying? Are We Next?
Are You Addicted To The News?
Put Down The Smartphone And Give Attention To Your...
What Is Cryptocurrency?
ARE SMARTPHONES MAKING YOU DUMB?
Media Giants Admit To Brainwashing The Masses